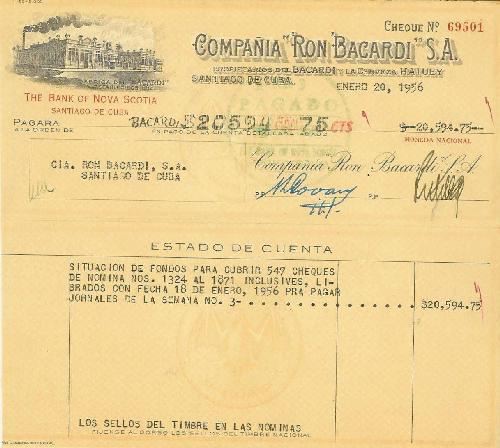 This is a check issued by the Bacardi Company to cover worker s  salaries for the 3rd week of the year   1956. The total of $20,594.75 is for 547 checks for the period ending on Jan 18 , 1956.  The average weekly salary for a Bacardi employee in 1956 was $37.65. The  average annual salary was $1,957.82, or a monthly average of $163.15 for a Bacardi employee in Santiago de Cuba. At the time, one Cuban peso was worth two American dollars!
In 2005, the monthly average salary of a Cuban worker is the equivalent of 10 USA  dollars, so, in 1956 a Cuban worker was paid 1632% MORE THAN IT HE  IS TODAY!  Furthermore Bacardi employees received outstanding fringe benefits like paid health insurance and vacation (one month)  required by the worker's union at the time.By the way, these were NOT the headquarters of Bacardi; hence there are no extraordinary executive salaries here that would invalidate the average.   And remember, as many other large entitites� Bacardi was a company owned and operated by Cubans. So, Cuban employees have lost not only money, but their freedom of speech, freedom of association, freedom to unonize and all their human rights.  Venezuelans, get ready! 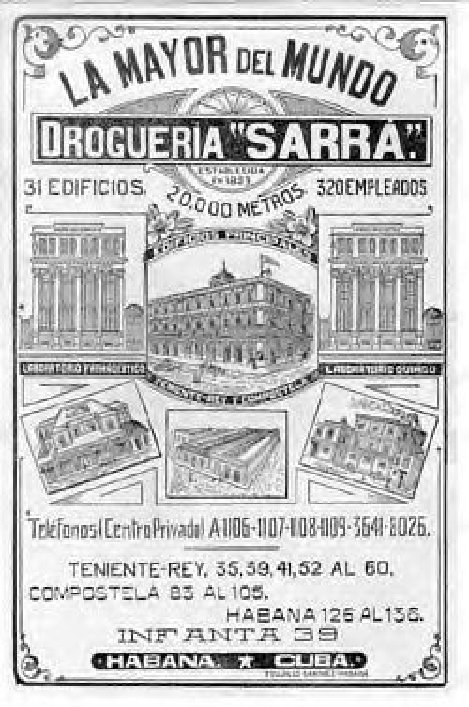 Today, desperate Cubans ask for medications from exiled family and friends. When Castro took  over, Cuba had numerous laboratories, the mayority owned and operated by Cubans, including Drogueria Sarra, the largest in the world. Look at the poster of "Sarra Drug Store" when it had 36 buildings with a total of 36,500 square meters and 320 employees. Today Sarra has only empty  shelves and no customers. 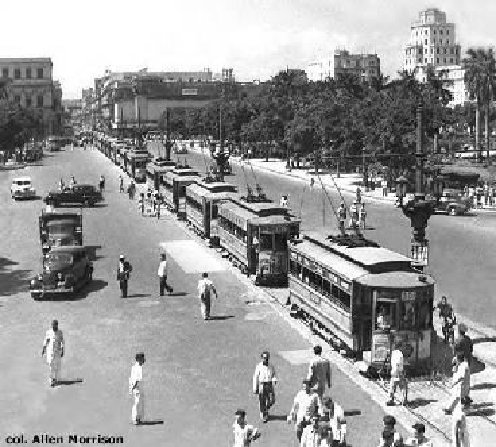 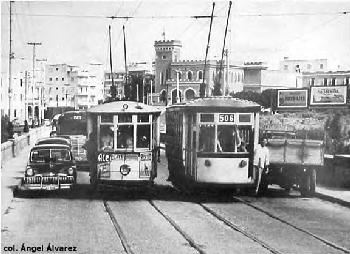 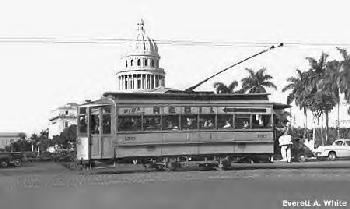 An old Havana tranvia.  The Capitol building can be seen on the back 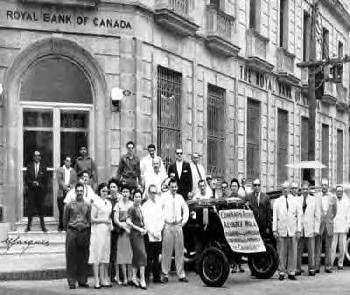 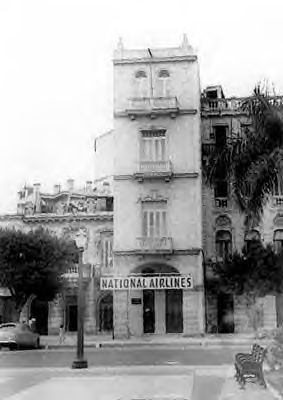 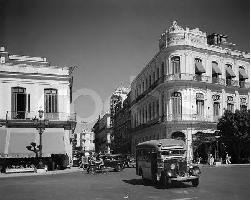 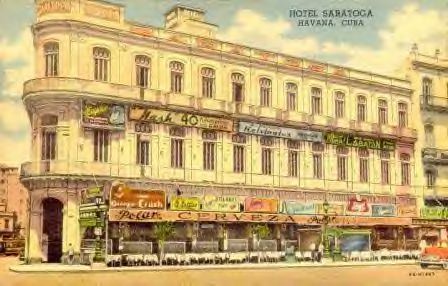 The Hotel Saratoga
It must be noted that of all the Ibero-American countries Cuba had:
The first railroad 11 years before Spain.  It started operating in 1837.
The first public electric lighting system, in 1889.
The first electric streetcars, in 1900.
The first printing press, in 1723.
The first black and white TV stations in 1950, second only to USA . By 1957 Cuba had three color television stations. Miami didn't have any until 1964!
The first international flight in Latin America was between Havana and  Key West in 1913.

For such a small country, the achievements of Cuba during its  brief  history as a free, sovereign country are remarkable. It is a shame that the "Pearl of the Antilles" has become a disaster zone of apocalyptic proportions during the 46+ years of Castro's control. It is a bigger shame that the world is blind to this fact.But there is more...

El Encanto, Havana's most famous department store was also considered one of the world's best during the 1950s. It was founded in 1888 by two partners, Jose Solis and Aquilino Entrialgo. It was situated at Havana's most famous intersection, Galiano and San Rafael, known to Cubans as 'La esquina del pecado' (The sin's corner), because of all the beautiful women that walked by on their way to El Encanto, and other department stores nearby, such as Fin De Siglo, Floglar, and the 'Ten Cent' (Woolworth's). It had subsidiaries in many other cities in Cuba, so the entire Cuban population had access to El Encanto merchandise.
Errol Flynn, Robert Taylor, John Wayne, Tyrone Power, Ray Milland, Debbie Reynolds, Pier Angelli, Lana Turner and many other Hollywood luminaries, used to shop at El  Encanto.  AlmostÂ every famous visitor to the Island stopped to shop at this gorgeous department store.
Here is how El Encanto looked during Christmas of 1953: 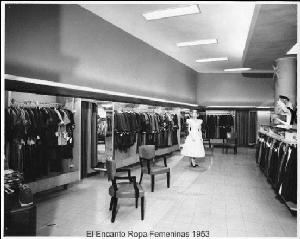 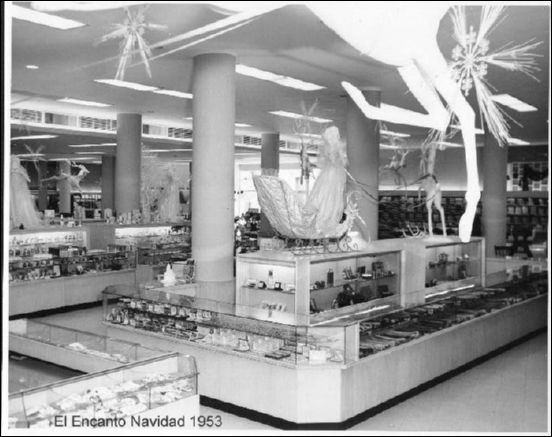 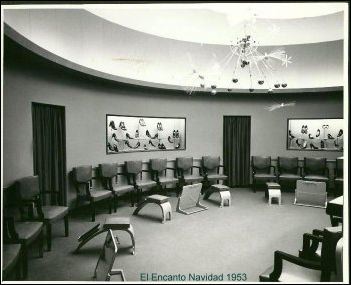 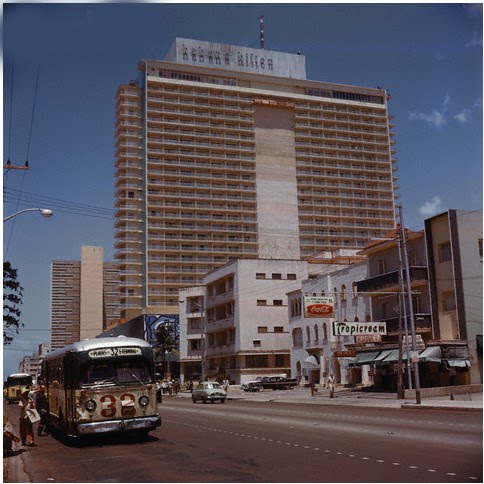 At night, Havana had nothing to envy cities like New York.  Its anuncios luminicos were as blinding as any found in other large capitals of the world! 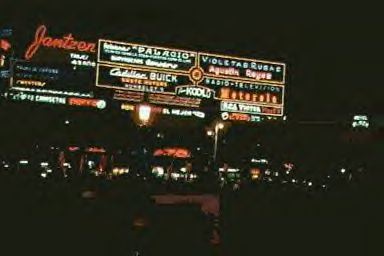 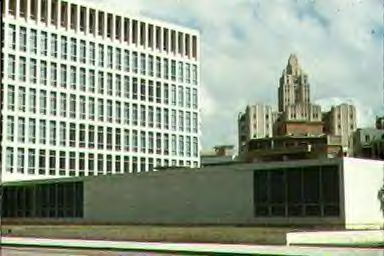 The American Embassy, said to be a replica of the UN building in NY. 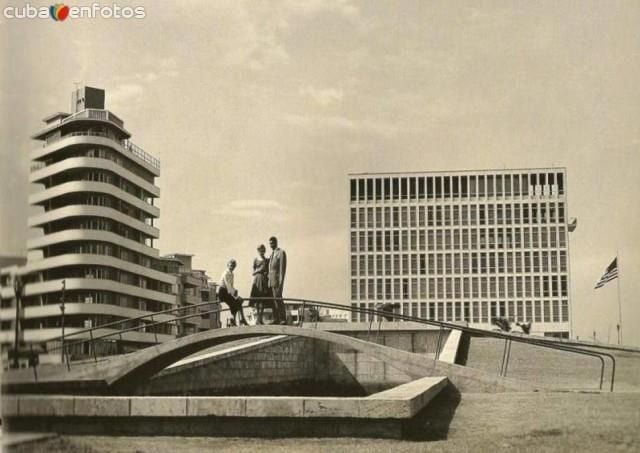 El Colegio de Belen   ( Belen School).   Fidel Castro was a student at El Colegio de Belen in Havana and later paid them back by taking over the school and closing it in 1961..
Here is an excerpt from an article in the Miami Herald on the 150th. Anniversary of the Colegio de Belen:"In 1854, the Real Colegio de Belen opened its doors to 40 students for the first time in Havana� after Queen Isabel II of Spain
issued its royal charter. Officially signed over to Jesuit priests in 1898, Belen steadily grew. By the time 80 communist soldiers occupied the school's campus for Castro in January 1961, it had 60 acres with 1,200 students. On Sept. 17 of that year, 26 Jesuit priests -- expelled by Castro -- boarded the Covadonga ship and headed for Miami. The Jesuits immediately opened a small campus for fewer than 200 students on the fourth floor of the Centro Hispano Catolico at the Jesus Church in downtown. The following year, they moved to a warehouse on the corner of Southwest Eighth Street and Seventh Avenue. On Â September 14, 1981 the school moved to its new
30 acres facilities at 500 SW 127th. Ave in Miami with an enrollment of 598 students. Now there are more than 1,000 students from 27 different countries attending Belen. 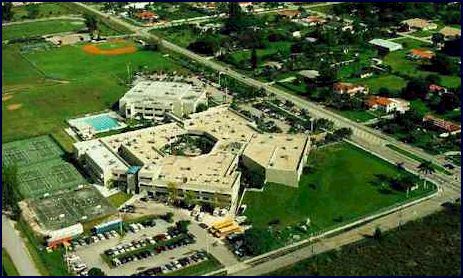 The Colegio de Belen in HavanaCuba and the BelenJesuit Preparatory School in Miami.
Below is a rare picture of a Havana celebrity: El Caballero de Paris. 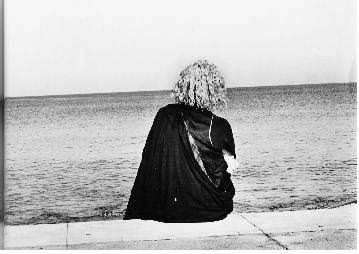 The famous Caballero de Paris (The Gentleman from
Paris ) sitting at the Malecon. El Caballero de Paris was
one of Havana's most colorful characters. You could
see him walking the streets, greeting everyone and
always ready to give you his philosophy of life, politics,
religion or any other subject that you wanted to discuss. It
was not rare for him to hand a rose or a carnation to a beautiful
lady. 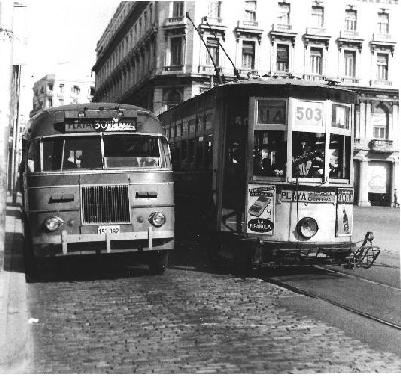 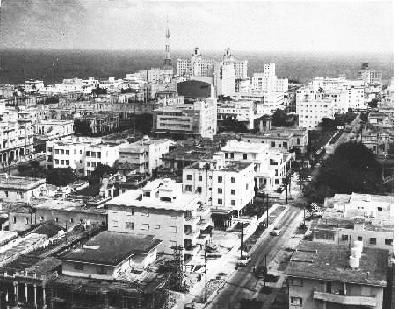 A bus and a cable car side by side with the CMQ Building, the Radiocentro Theatre and the Hotel Nacional 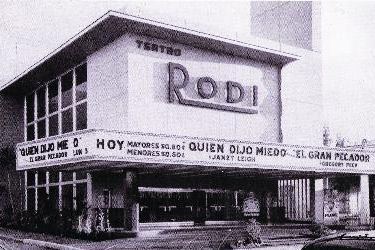 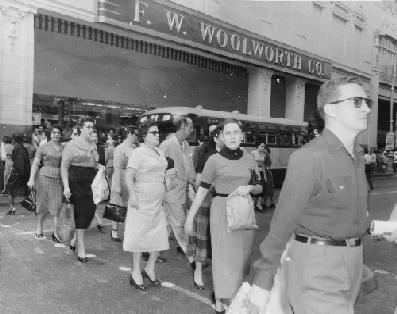 Teatro Rodi one of Havana's most popular theatres. The F.W.Woolworth store in downtown Havana was known as the "Ten Cent". When this photo was taken the movie house was showing two pictures, one starring Janet Leigh and the other one starring Gregory Peck.
The price? $0.80 for adults and $0.50 for children 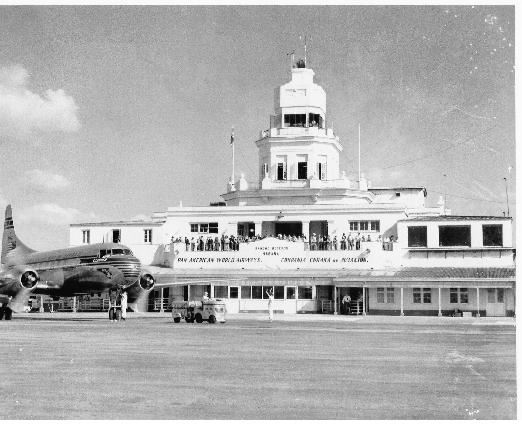 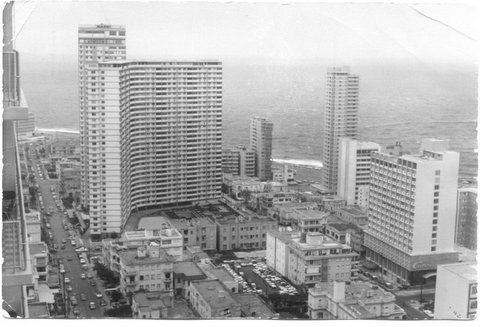 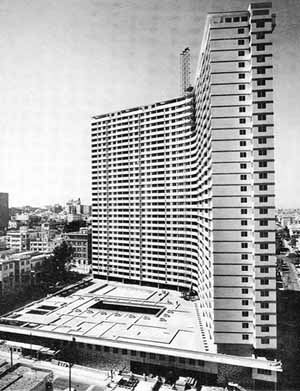 The FOCSA (Fomentos de Obras y Construcciones� S. A) is considered one of the marvels of Cuban
engineering. Built in record time, just 28 months, the FOCSA was located on a square block between 17, 19, M and N streets�  in El Vedado. Construction began on February of 1954 and the building was completed in June of 1956. The building has 39 floors, 30 floors for apartments and 9 floors for multiple use, including a movie theater, stores, supermarket and even a TV studio.
The building, 397 feet high, was made of concrete and at the time was the second tallest concrete building in the world.
The typical floor has 13 apartments, 5 apartments with 3 bedrooms and maid's quarters and 8  with 2 bedrooms and maid's quarters. The 3 bedroom apartments had a price of 21,500 pesos and the other ones were 17,500 pesos each. The price would go up 30 pesos for each higher floor.
In the 1990s the FOCSA, like many other buildings in Havana, turned into an eyesore. The higher floors became vulture nests. In 2000, there was an accident involving one of the elevators, when one of the elevator's cable snapped, killing one person and injuring 3 others, Many of the families still living at the FOCSA had to use the staircase to go down because they were afraid to use the elevators that were still running.
In the last few years the Castro regime has begun repairing the FOCSA. There are rumors that it plans to begin selling the apartments to wealthy foreigners. The photos below are courtesy of Mr. Alberto Quiroga whose parents were the owners of the Palladium Jewelry located at the FOCSA:

Vicente Len Len, FOCSA building manager, who died during the Bay of Pigs Invasion in April of 1961 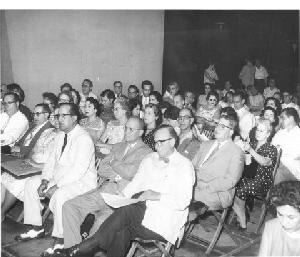 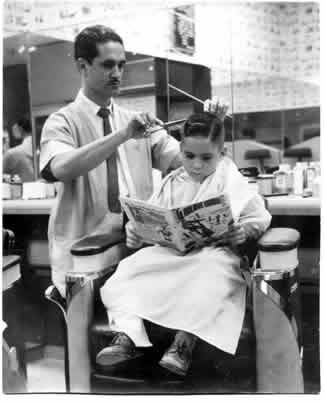 On top picture of a meeting of owners of the FOCSA apartment owners and below is a young Alberto Quiroga, who provided
some of these photos,  getting a haircut from barber Luis, at the Windsor Barber Shop at the FOCSA.

This is what Cuba was like when many of us left! The left wants you to think that Cuba was a very poor and underdeveloped country because that way it justifies their sick and insane admiration for the mass murderer that is the darling of Hollywood.
Please, send this to all your friends. The truth about what socialism (communism which has yet to be able to take over and destroy completely) can do to a prosperous country.(Click here for MAIN PAGE -  Página Principal)